Check out the match reports that were sent to us as part of our Roving Reporters 2020 Weekly challenge.

Take part in our Roving Reporters challenge in partnership with Sky VIP and share your reports with us @PLCommunities using #PLPrimaryStars or email PLPrimaryStars@premierleague.com. By sending us your report before Friday 17 July, you could win the chance to take part in a special virtual Q&A session with former Premier League footballer and presenter Jamie Carragher!

As part of our week 14 challenge, we asked you to watch this clip of a Wolves Vs Newcastle game and write an exciting match report to document what happened.

Below is some of the amazing work we've been sent. You can see who our Star of the Week was by heading to our 2020 Weekly challenge Stars. 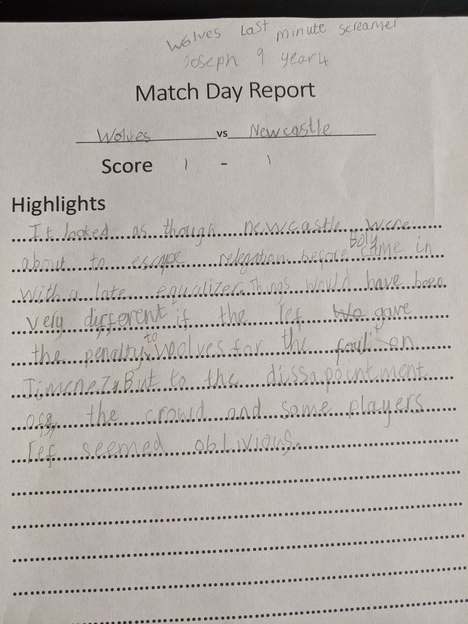 A few minutes gone and Wolves were on the break, as Jonny Otto crossed it in and it looked like Raul Jimenez was fouled. The Mexican was screaming for a penalty but in truth Christian Atsu made a very good tackle.

Raul Jimenez got down the line and got past his man but Newcastle’s Slovakian goalkeeper Martin Dubravka made a good save.

It was a corner to Wolves. Ruben Neves whipped the ball in but Matty Longstaff cleared it and Jonny Otto played it back to Neves but the same thing happened so Neves played it back to Jonny but Dubravka made another good save.

Leander Dendoncker played the ball outfield to Adama Traore and he whipped it in and Matt Doherty got on the end of it but could not turn it home.

Wolves had had nearly all the ball when Fabian Schar played a brilliant pass through to Isaac Hayden and he made it 1-0 to Newcastle.

Once again, Raul Jimenez was running with the ball at his feet, he gave it to Diego Jota and he hit it on the half volley but Dubravka was there again. The shot had something it shouldn’t have had. Curve. It should not curve on a half volley but for some reason it did. Martin Dubravka dealt with it well though.

In the final seconds Newcastle were leading 1-0, when Adama Traore had a go but it was blocked but Wolves weren’t giving up. Traore whipped it in but Martin Dubravka caught it. . . . . . . . . . .

The ball slipped out of his hands and Willy Boly headed the ball in!!!!

Wolves were celebrating all night.

I am reporting from Manchester in England.

Wolves started well with loads of great chances, in the first few minutes of the game they had a penalty shout but the referee said no penalty they were angry but the decision was correct but then in the 56th minute they conceded. 1-0! Hayden scored the goal but then Wolves had another riot of great chances and still they could not find a first goal and an equaliser. 90 minutes. They all thought 1 minute of added time, they knew it was all over, but the clock said 5 minutes, so they started to try and score. With the last kick of the game a cross by Traore and then this happened.

1-1! Last kick of the game Wolves draw level. What a game! 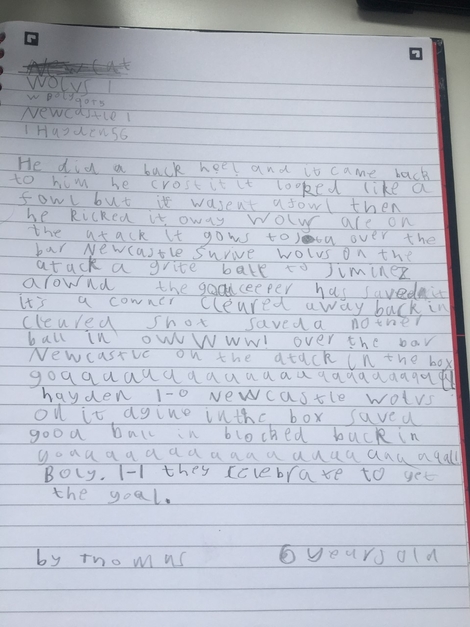 Alfie also wrote this fantastic report on his favourite historical football moment. What a fantastic idea! 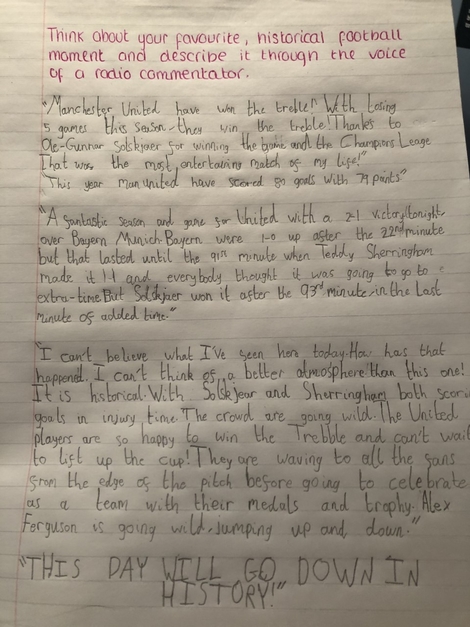