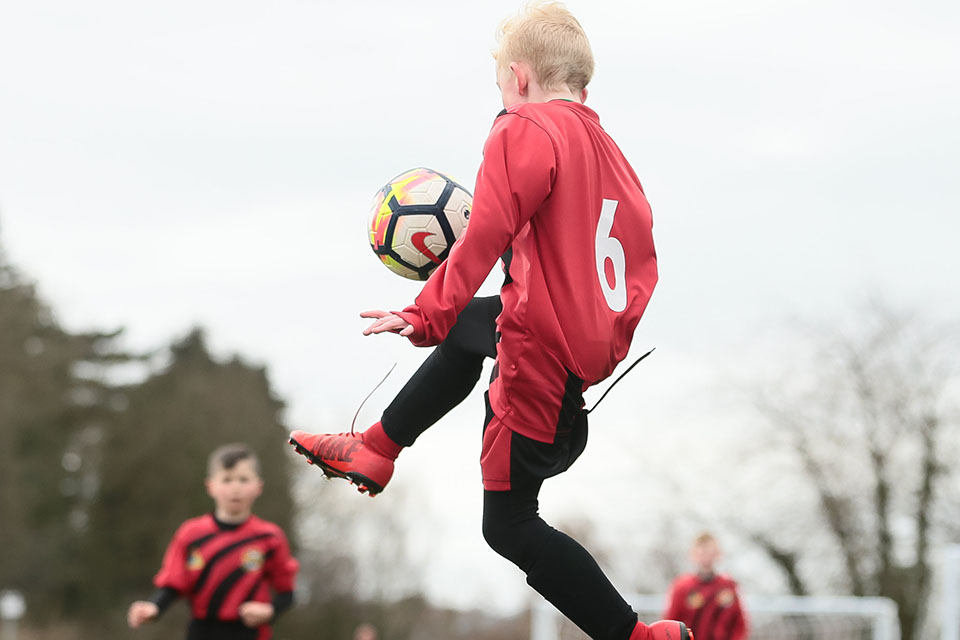 Our community has been doing all sorts of fantastic things over the past few weeks, inspired by our Weekly Challenges. We love being able to share what families have been up to.

Here are some of our Stars of the Week from the weekly challenges.

You can also click on the pages below to see more of the amazing work that some of our Primary Stars have done as part of the weekly challenges.

Star of the Week

This week's Star of the Week is Cameron. Have a read of his brilliant comic strip! 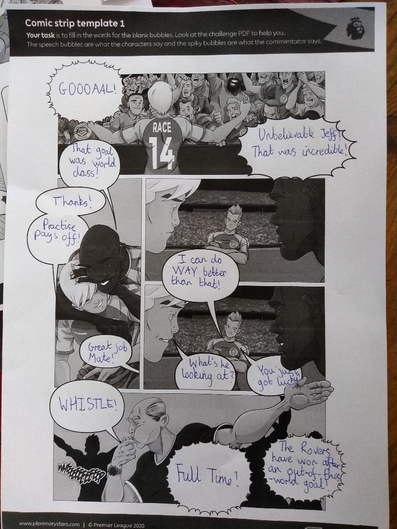 Joseph, age 9, has sent in his brilliant entries for both of our Sky VIP challenges. Take a look at his match report and interview question that he's created as part of Roving Reporters and Hot Seat Heroes.

'Match day report: Wolves last minute screamer
Wolves Vs Newcastle Score: 1-1
Highlights:
It looked as though Newcastle were about to escape relegation before Boly came in with a late equalizer. Things would have been very different if the ref gave a penalty to Wolves for the foul on Jimenez. But to the disappointment of the crowd and some players, the ref seemed oblivious.'

Sadio, how did you feel when the lockdown first started with the unsurety of not winning the Premier League after all that hard work?

Our Star of the Week is the fantastic Quinn for writing a brilliant match report about a previous Wolves vs Newcastle game! Well done Quinn! 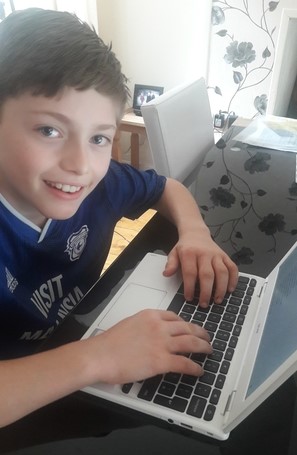 Boly rescues point for Wolves in late drama at Molineux

Wonderful interplay from wolves midfielder Jonny Otto and fellow midfielder Moutinhio seemed to open up a chance for wolves, Otto’s ball in the box was for striker Raul Jimenez who’s shot was blocked he was apparently pulled back by Newcastle’s Christian Atsu. The referee said ‘no penalty’ looking at the replay, Atsu won the ball.

Ruben Neves played another one of those long balls he produces, This one seemed to be just too long for Jimenez to chase but he eventually got there. Skipping a tackle from Deandre Yedlin saw Jimenez drive into the Newcastle penalty area. His initial shot was deflected off Fabian Schar and he also forced a first save of the game from Newcastle keeper Martin Dubravka.

The ball fell for Winger Diogo Jota, who’s cross shot ended up going out for a United goal kick. Mountinhio’s corner was kicked away by Matt Ritchie. Otto played it back to the long gone corner taker Jota, his ball was sent into the box, which found the head of Issac Hayden. Mountinhio played the ball to Otto again. His shot was saved by Dubravka, also it looked to have taken a nick of Ryan Bennett.

Wolves had a corner. It was now the second. Surprisingly the score still stood at 0-0, the ball was headed on by Jota. The Newcastle fans had their heart in their mouths, while Wolves fans were too busy starting to celebrate, only to turn round and see that attacking Right Back Matt Doherty had missed (Wolves fans can’t believe Doherty’s miss).

Newcastle suddenly in action now. Richie’s pass was to Christian Atsu, Astu’s pass was to Sean Longstaff, one of two Longstaff brothers in the Newcastle side. Longstaff played the ball to Ayoze Perez who played it to Centre Back Fabian Schar, he played to Issac Hayden who couldn't miss, his shot was parried by keeper Rui Patricio and into the goal. It was all Wolves, until this.

Hayden, who was one of two unexpected goal scorers today, helped Newcastle claim an unexpected goal. Newcastle had only lost 1 game from opening the scoring at that point in the season. Jimenez was straight on the break for Wolves when his pass to Jota was perfect. Jota didn't have the perfect shot, it was caught well by Dubravka.

Traoe’s shot was blocked on the 95th minute, he eventually found a ball into the box with the second unexpected goalscorer of the day, Wolves Center Back Willy Boly who made the remainder of the 30,687 home fans that arrived at the game finally have a moment to savour.

It all ended 1 a piece the final score. Wolves 1 Newcastle 1.

Our stars this week are the brilliant Kaleb and Charlie! Check out the fantastic Super Move they created to celebrate the Premier League season restarting.

Our star is the fantastic Delaney who has completed an amazing 7 of our weekly challenges! We absolutely love seeing all of your work - well done! 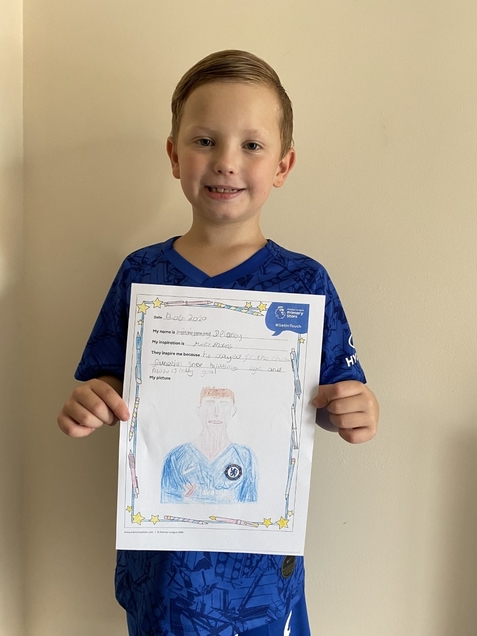 For this challenge, we wanted families to try and master a new and active skill by practising for 5 minutes everyday.

Our Star of the Week was this budding magician from Shrewsbury Town in the Community for learning this amazing trick! Take a look and see if you can guess how it's done.

We joined up with the National Literacy Trust and Jamie Johnson author Dan Freedman. We asked you to create your very own character for a football-themed story. We received lots of fantastic characters and stories.

The winner of the challenge was Safiyyah. Well done Safiyyah! You can read about her character, named Sarah below.

She is 8 years year's old and lives in Leicester. she has long blonde hair. She is kind and cares about the environment and recycling. since she was small all she dreams about is being a football star. ever since her dad took her to the open-top parade when Leicester City won the Premiership.

She normally is quiet and shy but very confident and aggressive when playing football.

There was a girl called Sarah who wanted to play football like her older brother Phillip. Phillip did not like if Sarah joined because he spies on her and she is really good. Phillip thought his friends would think his sister is better than him.  So when Sarah joined Phillip, he said Sarah was on the other team. Phillip told his friend, Sarah was bad and other lies. At break time Sarah's team made her Team Captain and the other side Phillips team complained that they were losing. This made Phillip mad. At the end of the break, there was a quarter game left. When Sarah asked Phillip why he was mad,  Phillip replied he was jealous. Sarah said to Phillip she was a little jealous too and nervous. This cheered Phillip up a bit. The end of the game, it was a tie. After that Sarah and Phillip started playing football together. sometimes even on the same team.

You can see more of the characters and stories on the Create a Character page.

In our week 9 challenge, we asked families to list some acts of kindness that they would aim to carry out in the next week, inspired by Mental Health Awareness Week.

Our Star of the Week was Norwich City Women's captain Millie, for sharing her acts of kindness on Twitter in order to inspire others!

Take a look at the video to see what she's been up to.

We also received this amazing work from Lorna-Leigh, (age 8). She created this brilliant poster about being kind to bees! 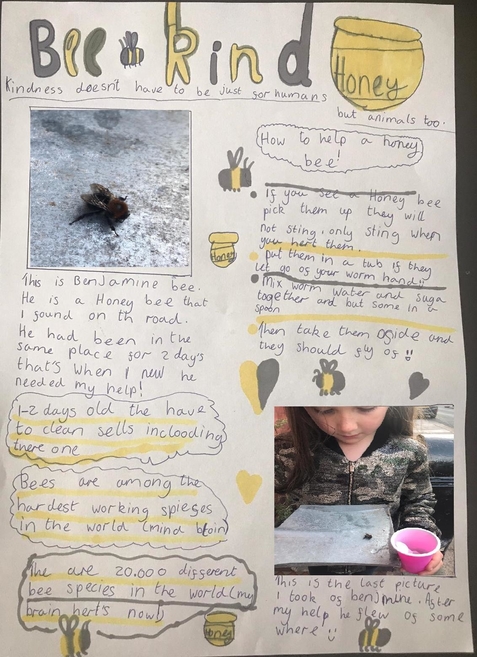 For our week 8 challenge, we wanted families to complete the story on our Share a Story template to send to somebody to make them smile.

Here is the beginning of the story:

Harry and Mia had been kicking their football against the wall all morning.
“Right, you two!” called Mum. “Let’s go out and walk off some of that energy.”

Mia scooped up the football in her arms and the trio set off down the road. They were just about to stroll past the large house on the corner, when a loud noise made them all jump. The football dropped to the floor and as Harry bent to pick it up, his draw dropped in surprise when he saw…

Our Star of the Week was Heejune (on the left), who wrote a brilliant story about meeting Harry Kane. 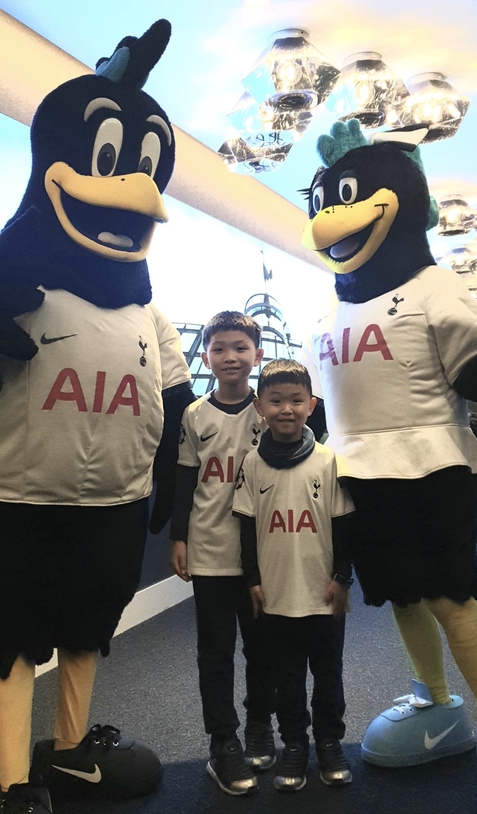 First, they practised some shooting. Kane took his shots weaker than he usually would and then stayed in goal for the kids to have their turn. Kane was really impressed with Harry and Mia’s shooting; he even joked that each of Mia and Harry’s legs were worth at least £3 million! Harry and Mia’s mum eventually came to collect them.
“Is it going well?” asked Mum.
“YES!” the children replied. They kept playing and Harry Kane wrote his signature in Mia and Harry’s notebook. Kane and the children said goodbye to each other and he left.

“That was brilliant! I wish I was as famous as Harry Kane,” said Harry and Mia to their mum. She said Harry and Mia may be as famous one day too if they kept practising. Every day, Mia and Harry looked at Kane’s autograph in their notebook, remembering their amazing afternoon together.

We challenged families to draw somebody you find inspiring and send it to an older relative, friend or neighbour as part of our ongoing #GetInTouch challenges.

Our star of the week was Hayden who drew this great picture of his teacher, Miss Speirs: 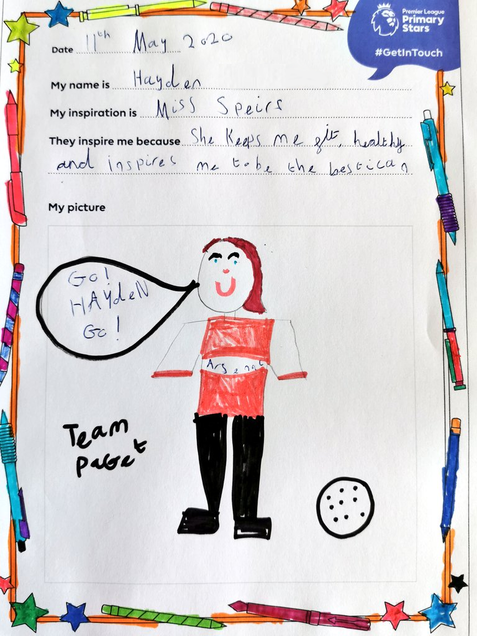 You can see more drawings on our Inspiration Drawing page.

Challenge 6: Get In Touch Challenge

For our week 6 challenge, we asked families to reach out to an older relative, friend or neighbour by writing them a letter to brighten their day.
Our Star of the Week was the fantastic Freddie, who wrote a brilliant letter to his 'Gangan'. 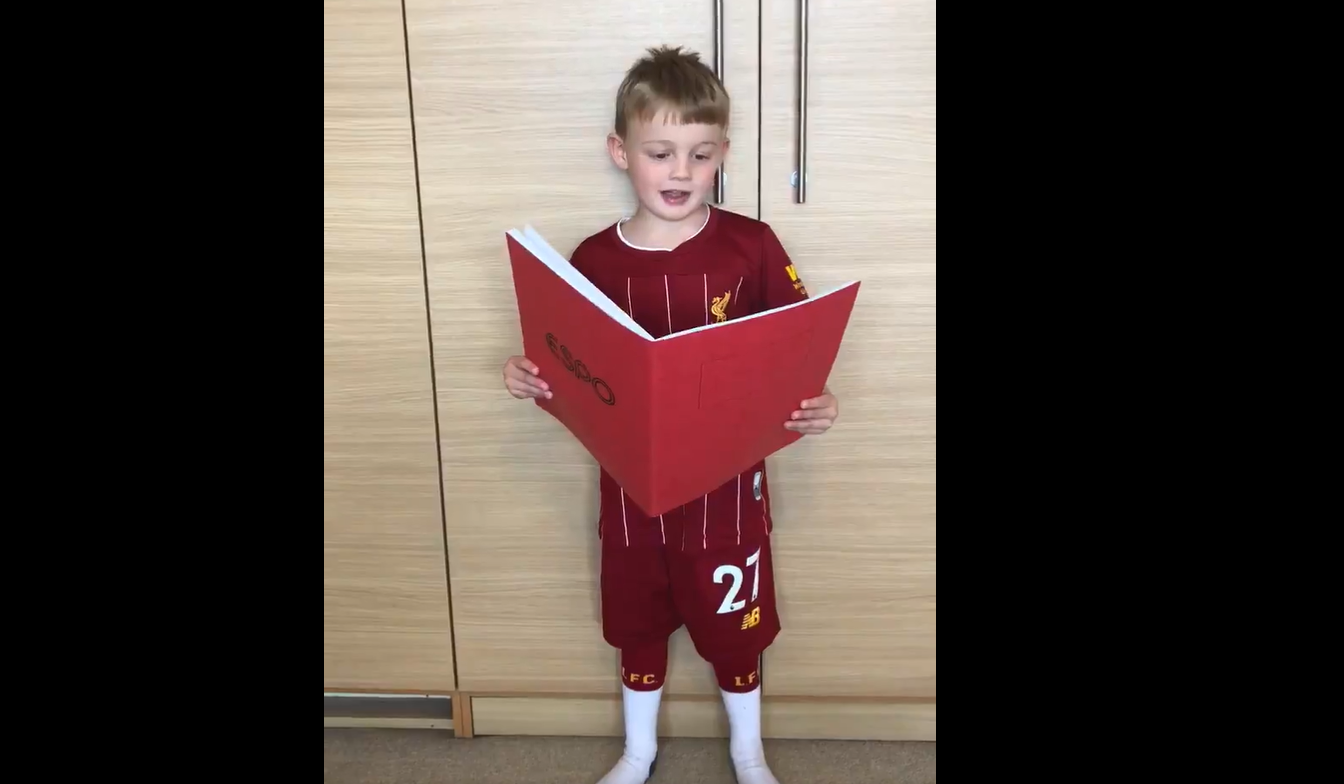 We asked your family to play a game to see how many socks each person could throw into a washing basket. Based on these scores, we then asked you to create a bar chart to show us how you did.
Our Star of the Week is Felicity who created a beautiful bar chart using lots of colours! 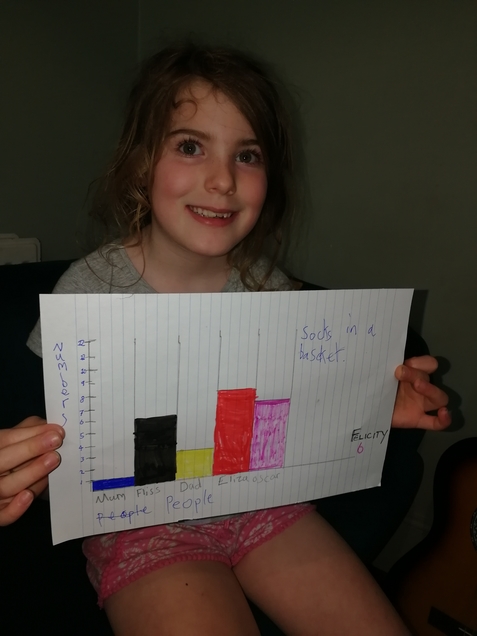 We have showcased more wonderful illustrations on our Character Drawing page, make sure you have a look!

Stanley was chosen as our Star of the Week. Stanley took part in our family reading challenge while showing support for his favourite team - Crystal Palace! 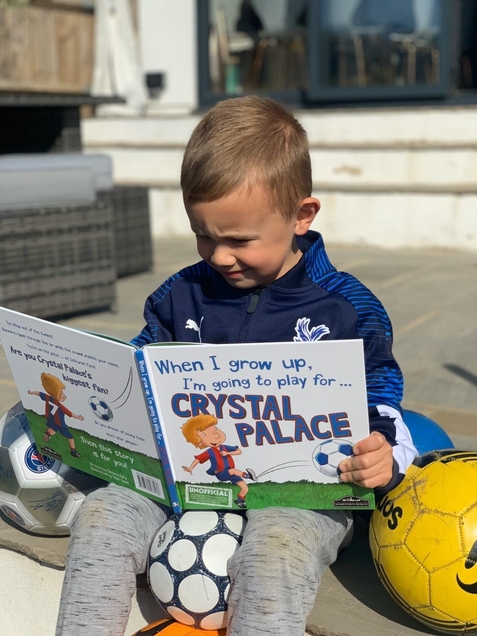 This week’s stars are The Lewendon family, who worked together to figure out the correct answers to our Stick with Maths team photo puzzle. 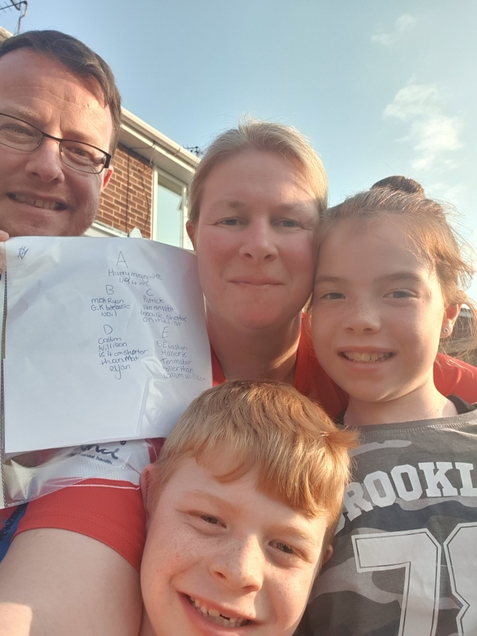 Well done George! George was our Star of the Week from the Premier League Writing Stars challenge. 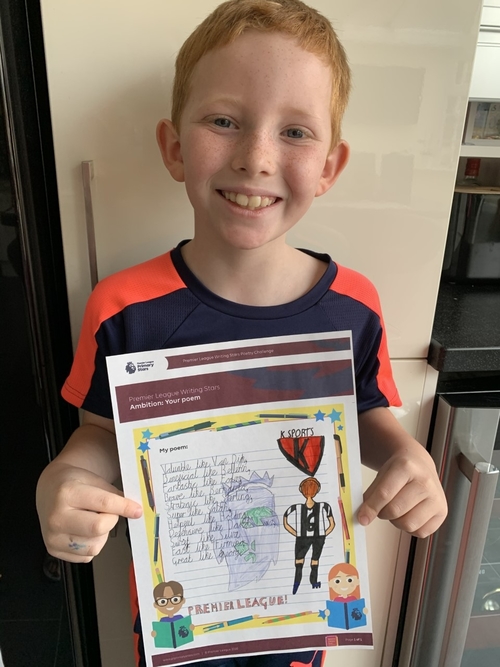 You can read more poems on the Ambition poem page.

Stay connected with us at @PLCommunities and tweet using #PLPrimaryStars. You can also email us at PLPrimaryStars@premierleague.com to share more of the great things you’ve been up to at home.

Don’t forget to also check out our Family Challenge story for our weekly family tasks and our Home Learning page for lots of fun, free resources.

Have a go at this week's challenge.

Say ‘thank you’ on Sunday 5 July 2020 to everyone who is helping others through these difficult times.

Read the winning poems of this year's writing stars competition!